The Saturday after Thanksgiving, I decided to bake our own turkey and thanksgiving dinner. I wanted leftovers, gosh darn it!

For desert, I picked a new recipe that I had found online. Pumpkin Snickerdoodle bars.

Did you get that? Pumpkin pie on top of Snickerdoodles. What could be better?

They were fairly easy to make, and we eagerly cut into the bars for our first bite. 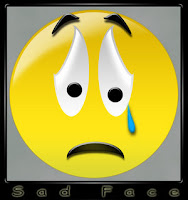 Now, I know I didn't overcook them because the pumpkin layer wasn't as "pie-like" as the recipe said it should be. It was fully set. So, why, when we dug in, was the entire dish- including the snickerdoodle layer- mush?

Mush I tell you!
I could only eat one very small square. The mushy texture of pumpkin pie is about all I can take. I couldn't add another layer to that, especially when it tasted like raw dough.

Then, let's talk about the salt.

The salt was all I could taste! Just a hint of pumpkin... and salt! Yeah... not good.

So... when nobody had taken another serving within the next few days, the whole pan got dumped in the garbage.

There is nothing that makes me sadder in the kitchen than wasted time and ingredients.

I considered blogging the recipe with some changes. But, that just seemed silly. Even with changes, I will never make it again, so what would the point be? I wouldn't want to be responsible for you wasting time and ingredients!

But... if I did change it, I would cook the bottom cookie layer before adding the pumpkin layer. And, of course, LESS SALT!

It's a good thing we had leftover Apple Pie from "real" Thanksgiving!!

**What new dish have you tried that failed? Would you make it again?

Posted by The Double Dipped Life at 1:01 AM