Quesadillas and perfecting an old recipe 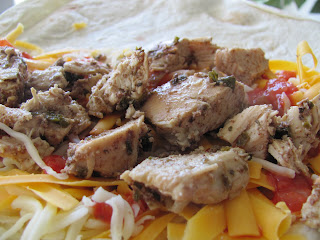 I was cooking for a crowd last week, and really wanted to make my Lime Cilantro Chicken. However, I needed a meal that would travel well. The thought hit me to do the chicken in the crockpot! That way, I could cook all day, and then the crockpot would keep it warm during the 45 min. drive.

This little experiment resulted in the best batch of Lime Cilantro Chicken I have made to date. The chicken just fell apart, and since it was baked right in the sauce, it had more flavor then when I cook it on the stove.

A few hours into the cooking, our family get-together fell through, so I was left with a lot of chicken! I used some to make these yummy quesadillas, and then froze the rest in 2 cup quantities. Now, I can just pull the chicken out of the freezer whenever I need too! 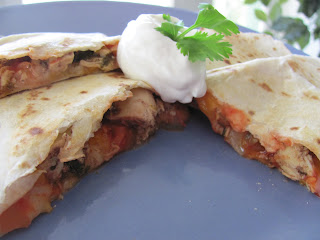 Here is the basic recipe again. I used 5 chicken breasts, so I doubled the sauce ingredients. I left the chicken whole, and just stacked them in the crockpot.

For crockpot:
Mix all of the ingredients, except the chicken, together. Lay the chicken in the crockpot. My chicken was even frozen! Pour marinade over the top, and cook on low for 5-6 hours. Shred chicken, stir, and cook until done.

Serve in a burrito, as fajitas, or in a quesadilla!  Serve with Cilantro Lime Dressing!

I spread cheese on half of a flour tortilla, added chicken and salsa, folded the top of the tortilla over the mixture, and grilled until the cheese melted and the tortilla was crisp. Yum!
Posted by The Double Dipped Life at 7:00 AM