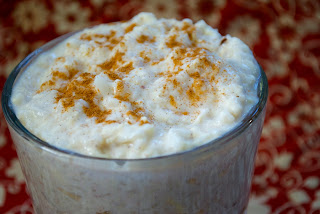 I had a craving to cook the other night, and oddly enough, it was to make pudding or panna cotta. This would have been easy, except it was late and we wouldn't have gotten to actually eat the results that night. So I was scrolling through my blog looking for something pudding-like that would set up faster. I came across my Tropical Rice Pudding.  My husband loves Rice Pudding. Loves it. It's something that I don't have a lot of experience with, and prefer regular pudding over rice pudding.  But, it's quick, and fit the bill. 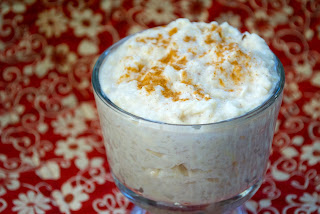 Instead of Tropical Rice Pudding, I decided to just do a Classic Cinnamon Rice Pudding. The basic mixture is the same, and I just added cinnamon to get a bite of taste.  It does have to rest for 30 minutes after cooking, but that's fast compared to traditional puddings.

Combine milk, rice, sugar, and salt in a medium pan.  Bring to a boil, stirring constantly.

Stirring constantly, cook on low heat 1 minute until thickened. Do not boil.

Serve warm or cold! Store any remaining pudding in refrigerator.


Enjoy!
Posted by The Double Dipped Life at 7:57 AM