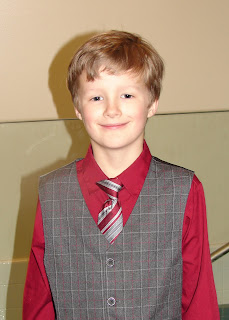 On Tuesday, I posted about my son's baptism.  Afterward we had a wonderful dinner for our family and friends.  Today I wanted to share some of those recipes!

Appetizers
Since people were coming from the church, and I still had last minute dinner prep, I had some ready-to-serve appetizers that I was able to set out quickly. This kept the crowd happy until dinner was ready.

Fruit Salad with Cinnamon Chips by Double Dipped Life
I've made this before, but this time I used Strawberries, Blueberries, Kiwi, and Pineapple. I sprinkled sugar and lime juice, and served with Cinnamon Chips. I did not make the chips this time; I got lucky and found a brand at Costco. This dish was probably the most raved about dish the entire night! I love it when the easy dishes are so good!

The Best Cheeseball by MelsKitchenCafe
This recipe makes 4 cheeseballs, but I only needed 2. So, I cut the cream cheese and cheddar cheese in half. I then forgot that I was halving it, and added the full strength spices and seasonings. But, you know what? It was divine!  The first ball was eaten quickly, and I ate the 2nd one over the course of the next week! I will make it this way from now on!

With these, we served a veggie tray from Smith's, Stacey brand Pita chips (my new favorite), and crackers.


Dinner
For the main course, I served a Ham from Costo, Crockpot Mashed Potatoes, and a Salad.  The salad was a simple version of my Spinach Salad with Spiced Pecans, Apples, Feta, and Cranberries. I bought a Spring Salad mix, added cranberries, and pre-made toffee almonds (made for salads), feta, and used White Balsamic dressing. It was a hit!  I'm going to hold off on the recipe for the potatoes for another post! They were so good, they deserve their own spotlight!
Dessert
Dessert was a cheesecake, also purchased from Costco, with an assortment of toppings. I also made Snickerdoodles for Tanner since they are his favorite! That recipe will be coming soon as well. I originally made the Graham Cracker Snickerdoodles, but discovered that recipe can NOT be doubled!
What a great night! I enjoyed everyone's company, and loved having a party to cook for. Thanks to all of you who came!
Posted by The Double Dipped Life at 6:00 AM