Don't you hate it when someone tells a joke that has to be explained? Well, I'm about to. Michael said the funniest thing at dinner tonight, but it requires some background. Sorry!

*We play the "Animal Game" in the car. Describe an animal, and the others guess it.
*We have 2 cats. A black/white cat, "Brigham", who is our lover cat. Then there is "Wednesday", part Siamese, who is our devil cat. Seriously.

Lately our game has turned into the following dialogue: prompted by McKenzie (3yr):
"It's (the animal to be guessed) black and white... nice...it is Brigham!!!" This is hilarious in itself, since she does either cat every time, and never lets us guess. Last night in the car, we did all Black and White animals, just to be funny. 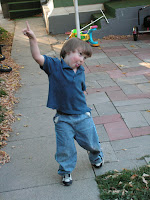 A few more guesses and laughs later, it's Dad's turn again. He starts to describe Wednesday.

Posted by The Double Dipped Life at 8:34 AM